Welcome to the 2015 Golf Preview, where I’ll take a look at selected golfers and examine what to expect over the next twelve months. Today, we look at Keegan Bradley.

Unlike good friend Jason Dufner, Keegan Bradley exploded onto the scene in his rookie year back in 2011 with a pair of early top-10’s and grabbed his first PGA Tour win in a playoff against Ryan Palmer at the Byron Nelson, which qualified him for his first WGC event at Firestone. He had a good showing there and went on to his first major, the 2011 PGA Championship at Atlanta Athletic Club. Dufner collapsed down the stretch, blowing a five shot lead with four holes to play, and allowing Bradley to force a playoff with two birdies in his final three holes. Bradley went on to win the three hole playoff, becoming only the third player in golf history to win a major in his first attempt.

Bradley followed that up with a win the following year at Firestone, and teamed up with Phil Mickelson to form an incredibly successful Ryder Cup pairing at Medinah in 2012, but the last two years haven’t been the best, as Bradley struggled to post just five top-10’s in 2014 despite good statistical numbers across the board. 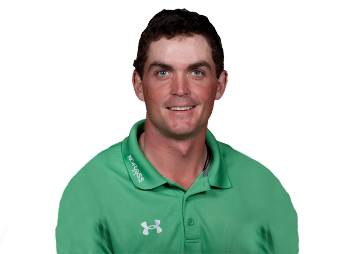 The only thing to pick apart here really is that Bradley has switched apparel companies twice since this photo was taken, going from Under Armor to Tommy Hilfiger and now jumping on board with Travis Mathew as of just a few days ago.

In addition to being one of the best ball strikers on the PGA Tour, it’s hard to take your eyes off of Bradley simply because of how quirky he is. The creepy stare down of his ball, which only happens on the greens, the pre-shot routine which you can see below, borders on the clinically insane and he’s never afraid to show his emotions on the course:

His never-ending battle with Dufner on Twitter is always worth a laugh too. 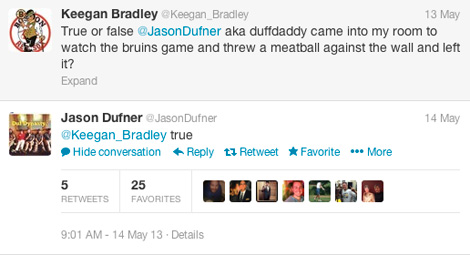 How is Bradley going to do with the regular putter?

Along with Adam Scott, Keegan Bradley is the most recognizable player in golf that uses a putter that is being banned in 2016, but unlike Scott, Bradley actually seems to use it to his advantage, as he finished 47th in Strokes Gained Putting in 2014. He actually switched at the Memorial last year and looked good with it in the opening round, but he kinda fell apart after that and ended up using the long putter for the rest of the season until a few weeks ago at Isleworth where he finished T3 and looked incredibly comfortable on the greens. I’ve always been a believer in the idea that these guys are so good that you could give them just about anything and they could make it work, but it’s obviously a big switch for Bradley considering how long he’s used the soon to be illegal putter.

How players like Bradley and Scott perform with a standard putter, whenever they decide to make a full-time switch, is a story worth watching in 2015.