On Monday at Kapalua, Patrick Reed was able to force a playoff with Jimmy Walker after a final round 67, winning it on the first playoff hole with a birdie and taking the opening event on the PGA Tour in 2015, the Hyundai Tournament of Champions.

With just a few holes left for the leaders at Kapalua, it looked like Walker’s tournament to lose and if anyone was going to take it from him, it was likely to be his playing partner, Hideki Matsuyama, but cue Reed on the 16th:

That hole out for eagle gave Reed a share of the lead and after a bogey-birdie finish, Reed posted -21 in the clubhouse to finish one ahead of Jason Day who fired a ridiculous final round 62. Behind him, Walker had bogeyed the 14th and couldn’t hit anything with the putter coming in, making par on the 18th to get into a playoff with Reed, while Matsuyama couldn’t join them in the extra session after missing a six footer for birdie.

What The Win Means For Reed

It’s been interesting to watch the evolution of Patrick Reed over the past eighteen months. He’s gone from promising young player to arrogant talent to Ryder Cup stud, but for all of the controversy that has seemed to follow Reed around, there’s been one constant that everyone agrees on: Reed is really, really good.

In the last 20 years, these are the players who earned 4 wins before 25: - Tiger - Rory - Sergio - Patrick Reed pic.twitter.com/h3vsGCMW7q

Impressive company to say the least, and he’ll jump back up to 14th in the Official World Golf Rankings. It was interesting after the round when he was interviewed by Steve Sands and he was asked about his confidence level. Reed didn’t shy away from it, but he was a little more guarded and refrained from saying anything that people like me could make a story out of, which as we know, is a stark contrast to what happened about nine months ago. As good as he is, it’s worth mentioning that after his last win at Doral, Reed struggled, posting just two top-10’s until the Ryder Cup where he was pretty much the lone bright spot in another European drubbing of the United States. I’m not sure if it was the weight of what he said in the aftermath of Doral that caused him to lose it, but after this win, there’s going to be an added layer of expectation that he needs to ready to meet. It’s going to be fascinating to watch.

One more thing about his round on Monday: After making that eagle on 16, Reed made a bit of a mess of the 17th, and needed to hit this putt to save par.

I know the 18th at Kapalua isn’t the most difficult hole in the world, but it was still impressive to see Reed bounce back as quickly as he did after giving one away so easily on the previous hole. You could see on the 18th tee too that he wasn’t exactly thrilled with himself either, and just like at the Ryder Cup, he bounced back. That kind of quality is hard to quantify, but knowing that he seems to feed off of mistakes like that is a very positive thing in my book.

Already showed Reed’s holeout, so take a look at this wedge from Jason Day’s third round. Incredible touch.

Even the beautiful swing of Hideki Matsuyama results in a dropped club from time to time.

They always say, “The Hyundai TOC doesn’t start until the back nine on Monday.”

Johnny Miller saying "muffy" over and over again makes me uncomfortable.

Bubba yelling at the sand on the first hole. Ted, you're next. #PrayForTedScott pic.twitter.com/TiNh7sldY1 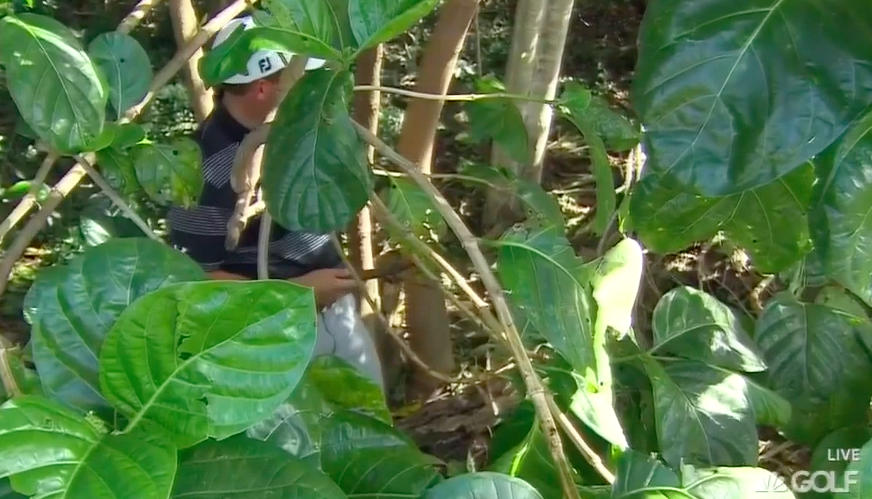 Scott Stallings is in there somewhere fighting spiders with a stick.

In case you don’t know where the hole is…

The funny thing about Bubba complaining about too much sand in the bunkers is that there's none in the fairway.

4 Comments on “Patrick Reed wins the Tournament of Champions”