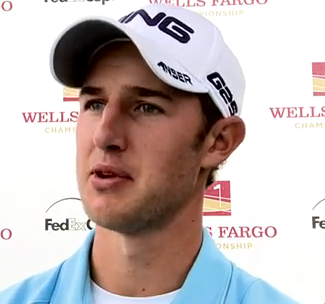 Derek Ernst fired a solid 2-under par round of 70 on Sunday and was able to best Englishman David Lynn in a playoff as the marquee names on the leaderboard all fell on a rainy Sunday afternoon at the 2013 Wells Fargo Championship.

Ernst was in a group of players all within a couple of shots of the lead held by Phil Mickelson and Nick Watney, but he was definitely the most anonymous name on that list. He was able to get into the clubhouse with a round of 2-under par, to get him to 8-under par for the tournament and tied with David Lynn. However, Mickelson was still on the course and after a birdie on the 14th, he was one shot clear of both Ernst and Lynn. Mickelson approached the 16th tee with the lead and drove his ball into the left rough, and after his approach missed the green and he three-putted, the lead was gone. The tough par-3 17th was next, and Mickelson missed the green, and proceeded to two-putt to drop another shot. After his birdie bid missed on the 18th green, we were going to see another first-time winner on the PGA Tour. Ernst and Lynn would head out to the 18th, and Ernst was able to win on the first playoff hole with a par after Lynn made bogey. It’s the first PGA Tour win for Ernst in his eighth start.

What the win means for Ernst

This isn’t Billy Horschel from last week. Horschel was expected to win on the PGA Tour at some point and had so many close calls this year, that you had to expect it at some point. Ernst came from nowhere. In fact, he wasn’t even supposed to be in the event this week, having only gotten in as the fourth alternate after several pros pulled out due to injury/unwillingness to play on poor greens. Ernst was on his way to Georgia from New Orleans in his rental car on Monday afternoon to play a Web.com Tour event when he found out that he got into the event, so he turned around and got to the event on time.


For players like Ernst, who play mostly on the Web.com Tour, these wins make all the difference in the world. Ernst is now exempt on the PGA Tour for the next two years, he’ll be in the PLAYERS Championship next week, the PGA Championship at the end of the year, the two remaining WGC events in 2013 and next year’s Masters. How about the financial end of things? Ernst took home just over $1.2 million for his win. That Web.com Tour event this week had a total purse of $600,000, and after you take into consideration all of the expenses those guys have, the majority of them won’t be making money. Ernst gave an interview to TourPlayers.com after the round:

Since I already harped on this last week, I won’t spend too much time on this today, but once again the PGA Tour can’t seem to figure out how to deal with broadcasting an event that is delayed due to weather. There was no coverage on TV for Sunday’s final round until 1:00 PM ET on Golf Channel despite the leaders teeing off before 9:00 AM ET. I’m sure people would have liked to watch an event that featured Phil Mickelson, Rory McIlroy, Lee Westwood and Nick Watney all at the top, but instead we were stuck with periodic updates on Twitter and PGATour.com’s average at best shot tracker. Figure it out, guys.

How bad were the greens this week?

Coming into the tournament, we had heard about the poor quality of the greens this week, and it really showed with the amount of missed putts from short distances. When watching the broadcast on Saturday, CBS’ Gary McCord said that the greens looked worse on TV than they did in person, but the below screengrab of the 9th green couldn’t have looked good regardless of your vantage point.

Several players pulled out of the event, but Rory McIlroy told the Charlotte Observer that it really wasn’t that bad:

“(The greens) are not as good as they usually are,” said Rory McIlroy, who won the tournament in 2010. “We come to Quail Hollow and they’re probably the best greens on Tour, usually. It’s unfortunate they’re not quite up to the standard that they usually are. But it’s no big deal.”

The weather hasn’t been kind to the course, leading to the poor conditions and there’s more to be done in the next few weeks. The course is preparing to host the 2017 PGA Championship and part of that prep is converting all of the greens to Bermuda grass. That work will commence this summer.

Garcia had quite the day in Friday’s second round. Aside from firing a solid 4-under par 68, he pulled off some typical Sergio magic. With a massive spike mark right in front of his ball on the green, Garcia decided to take out the wedge from five feet away and attempt to chip in for par. The difficulty level of this shot is at least a 9/10, despite how easy he made it look:

Later on, he hurt his upper back with a terrible swing on the 10th hole, and after his round was complete, he was made aware that a television viewer called in for a potential rules infraction on the 17th hole. The viewer alleged that Garcia improperly marked his ball on the 17th green, and after reviewing the tape with rules officials for 45 minutes, it was deemed that Garcia didn’t commit any infraction after all. Talking to Steve DiMeglio of USA Today after the round, Garcia was a little upset by the whole thing:

“Someone called in and said I marked the ball on one side and put it down on the other side. It obviously wasn’t true. We looked at the video,” Garcia said. “I felt I put it in the same spot. You can see there is a tiny bit of a difference … But it’s difficult to put it in the exact same spot every single time. If they looked at every player, they’d be penalizing everyone in every round.”

We need to stop with this viewer calling in rules violations shit. If the PGA Tour would simply have a rules official present to watch the broadcast, we could avoid all of this nonsense with fans being allowed to phone in with things that aren’t actual violations. In a game that has a lot of stupid, irrational garbage attached to it, this one might be the worst.

Both Kevin Streelman and Phil Mickelson displayed some ridiculous spin out of the bunker this week, but doing it in completely different ways. First, Streelman gets it to hit and stick:

Mickelson hits it a little deep and gets it to come back towards the hole:

These guys are still human

PGA Tour players do things on a weekly basis that seem utterly impossible on the golf course, but sometimes they do this:

Mickelson isn’t exactly the straightest hitter of the golf ball, and if I had to guess, I’d say that he’s given out the equivalent of six figures in free merchandise to fans after he’s decked them with one of his Callaway’s. He did it again late on Saturday from the middle of the fairway:

Despite receiving medical attention, the fan seemed to be just fine, and just looked to be happy to meet Mickelson:

Leave a Reply to The Grateful Golfer Cancel reply