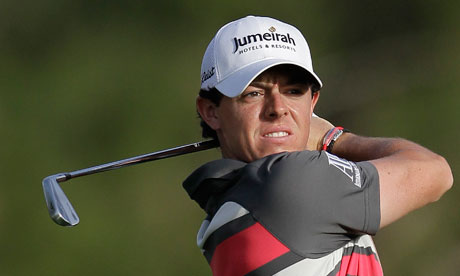 Rory McIlroy and Graeme McDowell head up the field this week in Ireland, as the European Tour returns to Canton House for the first time since 2006 for the 38th playing of the Irish Open.

McIlroy has played in twelve events so far in 2013, and despite four top-10 finishes, he has yet to come away victorious. This of course has led many people to speculate about what is wrong with the 24-year old two-time major winner, and everything from the new Nike clubs to his relationship with tennis star Caroline Wozniacki has been blamed for his performance. Personally, I just think he’s an inconsistent player who has arguably the biggest gap between his highs and lows of any player we’ve ever seen, but that doesn’t fall into the convenient narrative that many in the golf media like to spin, so instead, we get a bunch of “What’s wrong with McIlroy” stories. He’s far and away the most talented player in the field this week, and along with McDowell, is playing in his first Irish Open since 2011. He is the main focus this week.

As you may have been able to tell, the course was designed in 2003 by World Golf Hall of Famer Colin Montgomerie, and it is considered to be one of the more difficult tracks on the European Tour schedule in 2013. In the 38-year history of the event, Carton House has played host twice, in back-to-back years in 2005 and 2006, with winning scores coming in at 9-under par in 2005 by Stephen Dodd and 5-under par in 2006 by Thomas Bjorn. In those years, the lowest score fired in the eight rounds played has been a 66, shot by Nick O’Hern, Oliver Wilson, Titch Moore and Bjorn.

What makes it so tough? From the tees, there are very few shots that play straight away, so the players will have to draw and cut the ball off the tee quite a bit. Miss the fairway, and they will be in trouble, as the rough is very thick, especially in the deepest areas. The most difficult part of the course though is dealing with the greens, which have tons of undulations and slopes, where the balls will feed into some very deep bunkers. Keep it on the green and they’re expected to roll at around 11 on the stimpmeter, so they will be playing very fast. The Montgomerie Course plays even more difficult when the wind gets up, which it is supposed to do steadily as the week rolls on, and there is a chance of showers towards the weekend. You can watch a quick preview of the course from Shane O’Donoghue in the video below:

Thomas Bjorn (Best Odds 16-1 at Paddy Power)
As I mentioned above, things seem to be coming together for him right now, and with his track record here, it’s really difficult to ignore him. The combination of being a good ball striker and a great putter should serve him very well this week.

Ross Fisher (Best Odds 25-1 at Coral)
We talked about Fisher last week, and he did end up playing pretty well in Germany with four rounds at par or better and ending up tied for 18th. There, he was third in driving accuracy at 78.6% of fairways hit and fifth in putts per green at 1.62. This is the type of player that we saw emerge a few years ago, and his track record in the event is solid, winning it back in 2010 and finishing tied for 5th at Carton House.

Francesco Molinari (Best Odds 33-1 at Ladbrokes)
Yeah, he missed the cut in his last start at the U.S. Open, but a lot of quality players did that, so I’m not reading too much into it. He’s also not a great putter, but outside of McIlroy and McDowell, Molinari is probably the best ball striker in the field. He doesn’t have a single under par round at Carton House in his career, but he’s a much better player now than he was then, and I don’t understand why he’s available at this kind of price.

Eddie Pepperell (Best Odds 143-1 at BETDAQ)
Pepperell has never played the course or even in the event, but his skills are a good fit, as he prides himself on his control from the tee and a solid short game. Before missing the cut at Merion a few weeks ago, he played very well at Wentworth, ending up tied for 6th. On an each-way bet, this makes a ton of sense.

Robert-Jan Derksen (Best Odds 150-1 at Spreadex)
Derksen is coming off of a top-10 finish in Germany, and played decently in his last trip to Carton House, ending up tied for 12th. He’s pretty short from the tee, but usually hits a ton of fairways. Derksen and Pepperell both make up decent value as dartboard picks.