Thoughts ahead of the final round at Muirfield 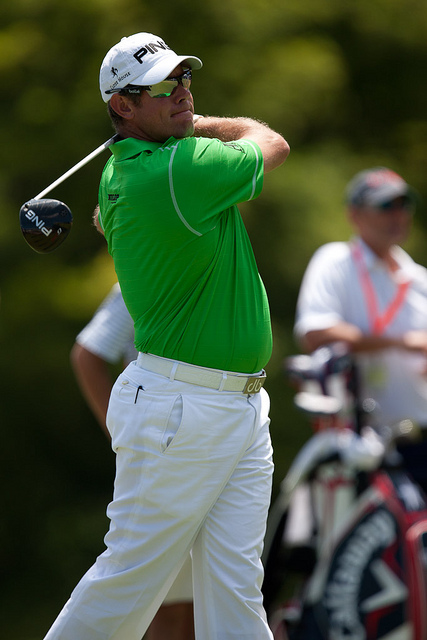 Just a couple of quick thoughts ahead of Sunday’s final round at Muirfield, where Lee Westwood will carry a two-shot lead over Hunter Mahan and Tiger Woods.

Westwood was the story of the day, combining great ball striking and solid putting to finish 1-under for the day and 3-under overall. He’s had plenty of chances to win his first major in the past, with seven top-3 finishes on his resume already, including holding the lead going into Sunday at the Masters in 2010 which was eventually won by Phil Mickelson. Long major droughts were already ended this year by Adam Scott and Justin Rose, so it seems fitting that we could be in for another one tomorrow, and it would also continue a pretty incredible summer for English sport, having already seen Rose triumph at Merion and Andy Murray end their hideously long wait for an English champion at Wimbledon.

Much was made at the beginning of the year about Westwood’s decision to sack long time coach Pete Cowen, as well as good friend and caddie Billy Foster. At the age of 40, he knew he was running out of time and decided to make two pretty major switches, with Mike Kerr taking over for Foster and as we heard this week, Sean Foley has started to work with Westwood as well. In the past, the issue with Westwood has been his short game, but it was working wonders for him today. All eyes will be on him tomorrow to see if he can finally close out that major win.

Woods had an interesting day to say the least. The course was playing very difficult, as evidenced by the lack of players who were under par for the day, but Woods should have been under par based on the way he was hitting his irons, which were pure for most of the day, but the putter was a little off, leading to the 1-over par 72 that he ended up with. The curious decision for me was when he left driver in the bag on 17, preferring to go with the 3-wood instead, despite the hole playing dead into the wind at 575 yards. I know he’s only used it once this week, which was today at #5, but it didn’t make any sense based on the situation. He ended up trying to hit 3-wood again from the fairway, but left it woefully short and into a bunker that he just had to pitch out of and eventually led to a bogey.

I’m not going to try and get into his head like so many other people do, but the general thought on the broadcast and on Twitter was that it pointed to a lack of confidence with a new club. That could be the case, but like I said, I don’t know for sure and I’m not going to bother trying to figure it out. Just seemed like a weird choice of club given the situation.

Hideki Matsuyama was assessed a one-stroke penalty on the 17th hole for apparently taking over two minutes to play one of his shots, while several groups, including the final two (Westwood/Woods and Jimenez/Stenson) were put on the clock before getting taken off at points during the round. What was interesting was the reaction from those in the golf media who thought it was unfair to penalize Matusyama for the slow play. These are the same people who have called for slow play to be stamped out, but now they’re complaining about a young player getting penalized when he was way over the limit, even after being warned? You can’t have it both ways, guys. Over two minutes is way too long, even in the conditions that the course put the players in today. Nobody wants to see a player lose a tournament due to a slow play penalty, but the players also have to keep it within reason here as well.