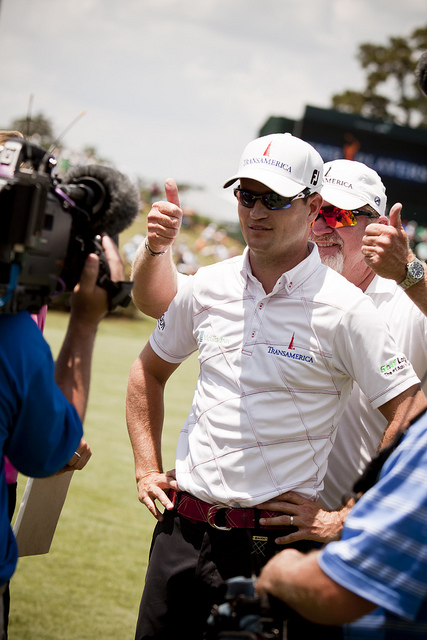 Zach Johnson fired a final round 65 on Monday to win the 2013 BMW Championship at Conway Farms.

Due to a massive amount of rain in the Illinois area over the past few days, play at the BMW had to be extended until Monday morning, with several groups still waiting to tee off and begin their final round. Jim Furyk and Steve Stricker would play in the final group, with Johnson and Brandt Snedeker right in front of them, and both Tiger Woods and Charl Schwartzel were lurking just a few shots back in the third to last pairing. Furyk started out playing very steady golf, sitting at 2-under par for his round after a birdie on the 10th hole. Stricker wasn’t as fortunate, playing even through 10 until a double bogey took him out of it on the par-3 11th.

Nick Watney was able to get into the clubhouse at 14-under par after posting a 64, while just in front of the final group, Snedeker was struggling to stay near the top after a 3-over par front nine. Johnson was really solid though, playing the front in 3-under and after another birdie on the par-4 12th, he gave himself a share of the lead. Behind him, Furyk would make three bogeys in a six hole stretch from 11 to 16. Johnson made two long birdie putts on 16 and 17 to carry a three shot edge over Furyk as he went to the 18th tee, and at that point, it was all over. Johnson had his tenth PGA Tour win, and Furyk has to deal with another blown lead in a final round.

What The Win Means For Johnson

That’s a pretty exclusive list, and the ten wins actually makes him eligible for the Hall of Fame, but I don’t think many people actually think of Johnson in that light, especially when you consider the uproar that took place when Fred Couples got in this year. He’s definitely on the list for most underrated players in PGA Tour history. In the short term, Johnson moves to 4th place in the FedEx Cup and if he’s able to win at East Lake this week, he’ll claim the $10 million first place prize.

Furyk’s second round 59 was the sixth in PGA Tour history, as Furyk joined Al Geiberger, Chip Beck, David Duval, Paul Goydos and Stuart Appleby as members of the exclusive 59 club. It goes without saying that Furyk played a tremendous round of golf and he deserves every word of praise possible for the achievement, but the coverage of the round by the golf media ended up being pretty cringeworthy from at least three angles:

First, Golf Channel’s Brandel Chamblee and Jason Sobel felt the need to compare Furyk’s 59 to the other five, as if there was something wrong with any of the other rounds. Sports fans always feel the need to compare things, but with so few 59’s ever being fired, what’s really the point here? There’s been six ever, all with things that made them special, so let’s just leave it at that.

Secondly, there was some thought that Furyk set out there to prove a point to Fred Couples after he wasn’t chosen for the American President’s Cup team. Furyk was disappointed that he didn’t make the team, but the idea that he went out there to stick it to Couples is pretty ridiculous.

Lastly, some suggested that Couples made a mistake in selecting Jordan Spieth and Webb Simpson over Furyk based on the 59. My thoughts on Furyk being selected are well known, and as I tweeted on Friday night, Furyk’s inability to close out events made him a pretty difficult pick. You can’t praise the picks of Couples one day and then criticize him just because one of the guys he left off had a really good day.

What The Loss Means For Furyk

As harsh as it sounds, today was the reason Furyk wasn’t selected for the Presidents Cup team by Couples. The loss now makes him 9 for 23 when leading or sharing a 54-hole lead, which equates to a 39% winning percentage. Among active players with at least ten wins, Furyk is only ahead of Davis Love III in winning percentage. You can say that he got steamrolled by Jason Dufner at the PGA Championship and by Johnson today, but the fact is that he just didn’t play well enough to win and whether that’s because of his age, skill set, or whatever else, he’s just not getting it done. Much like last year, he’s having a good season statistically, but there’s no chance that he’s satisfied with the way that 2013 has played out.

Another tournament in 2013, and another rules violation for Tiger Woods. On the first hole for Tiger in Friday’s second round, he hit his approach into the trees and went about moving some twigs to get at his ball. You’ll see a little movement when he goes to move the second twig. After that, Tiger played his shot as normal and put down a bogey six. So, what’s the problem? A PGA Tour Entertainment camera man saw the incident and reported it to tournament officials who reviewed it and determined that the ball did in fact move, and should have been a two-shot penalty since Tiger didn’t replace his ball.

After being shown the video, Tiger disagreed with the ruling, saying that the ball didn’t move, it just oscillated. The oscillation implies that the ball returned to its original place on the ground, which is not cause for a penalty. Did he deserve the penalty? Yeah, I think the video clearly shows that he did deserve the two-shot penalty, but I also think he was the closest player to the ball at the time, so he might have seen something that we couldn’t based on how close he was to the situation.