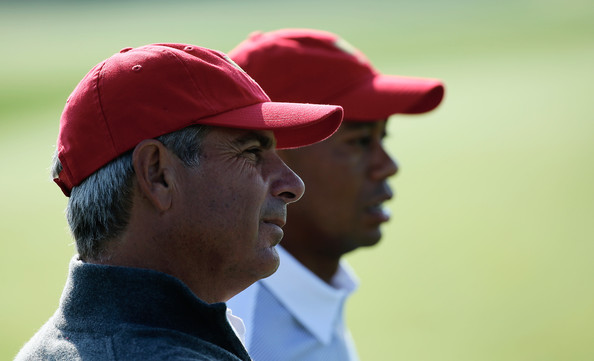 At several points this week, the Internationals looked to be every bit as good as the Americans, but coming into the Sunday singles, the lead was simply too big. The 14-8 advantage meant that the Americans only needed to win four of the twelve matches to retain the trophy.

Jason Day got the Internationals off to a good start, taking out Brandt Snedeker, but Hunter Mahan soon followed by taking care of Hideki Matsuyama. The Internationals continued their good run and made it a lot closer than expected when the day started, but they couldn’t catch up, with Tiger Woods closing it out against Richard Sterne on the 18th. The Americans win the 2013 Presidents Cup over the Internationals. With two matches still on the course, we’re awaiting a final score, but it’s looking like it’ll be 20-14.

I’m not sure what the answer is here, but it certainly appears that something needs to be done to switch up the format of this event if the American side is going to consistently dominate like this. When the event was started in 1994, the gap in talent was at least perceived to be a lot closer than it is now. The International side in 2013 is very top heavy, and their depth just isn’t there when compared to the Americans. At this point, the event just feels manufactured in order to get some of the best players in the world, like Adam Scott and Jason Day into some form of team event, and it just isn’t working. What makes the Ryder Cup so special, outside of the fact that the golf is always terrific, is that the European side really feel a sense of pride when they suit up, whereas this just feels like a bunch of good players from all over the world who just split up when they got to the course that day.

Some would suggest combining the Ryder Cup and Presidents Cup into one event, but that has obvious problems. The Europeans would never go for it, as that passion that we all love about the Ryder Cup would be severely diminished. To be honest, it might just be one of those things where the tournament has run its course. It’s had a good go in the past, but the excitement and intrigue just isn’t there anymore. The golf is still at a high level, but the event is running the risk of being irrelevant if the results are going to play out like this every time the players tee it up. Yes, it was an inspiring comeback attempt, but realistically, there wasn’t enough of that throughout the week.

For the most part this week, the television coverage in North America was pretty good, especially if you’re in the pro-NBC camp. One thing that has become pretty apparent, at least in my view is that Golf Channel’s Frank Nobilo, a former Presidents Cup player and assistant captain, is the next big golf media star. He’s not afraid to speak his mind, but he brings a lot more balance to the discussion than most. When you compare him to the very pro-American views of Johnny Miller and Brandel Chamblee, Nobilo is able to be critical but not in a way that seems dismissive.

The one area where the coverage was brutal was for the Sunday session where NBC inexplicably decided to air the tournament via tape delay. TSN in Canada and Sky Sports in the UK aired it live. You know what they say, there’s nothing better than a tape delayed golf shellacking. Golf Channel showing the Seve Trophy didn’t make a ton of sense either when they could have just showed this event live.

One of the interesting things for me on Sunday was to watch the media reaction to the Sunday pairings. It was pretty obvious that the Americans were going to run away with this thing unless the Internationals staged the most unlikely of comebacks, so the golf media took it upon themselves to openly pine for the captains to get together and manufacture the pairings for more excitement.

Thoughts of Woods vs. Scott, Mickelson vs. Day and Spieth vs. Matsuyama were getting the media positively giddy, but when that didn’t happen, things got testy. Here’s just a small sample:

Tiger Woods vs. Richard Sterne. The captains may have given this Presidents Cup the perfect anti-climax to an anticlimactic Sunday.

Even though it seemed unlikely that the Internationals would stage that comeback, it’s not the job of the captains to appease the fans or the media with their pairings. Keep in mind that these are the same media types, and it wasn’t just these three, who would probably be ripping into the captains or the event for manufacturing excitement if they had orchestrated something with the pairings. Look, we all wanted it to be closer heading into Sunday, but it wasn’t. Sometimes that happens. I’m sorry that you had to watch and cover a golf event this weekend that didn’t give you enough enjoyment.