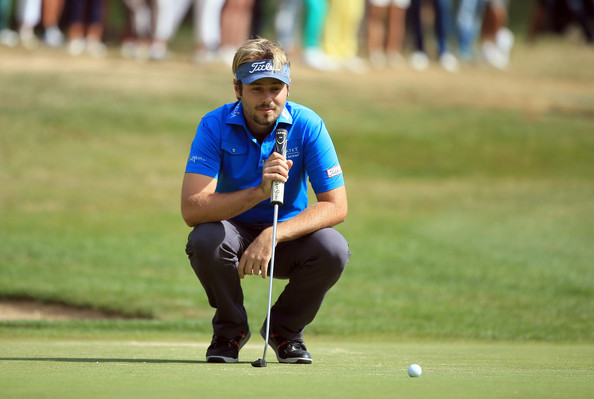 Victor Dubuisson was able to hang on to a five-shot lead on Sunday, winning the inaugural Turkish Airlines Open by two shots over Jamie Donaldson.

It wasn’t supposed to end this way, I can tell you that much. With names like Tiger Woods, Henrik Stenson, Justin Rose, Lee Westwood and Ian Poulter in the field, a big name winner was expected, but it was 23-year old Victor Dubuisson of France who carried a five-shot lead over Poulter heading into Sunday. With the course softened by rain all week, the players were going very low, with scores of 62, 63 and 64 seemingly common.

Being a front runner isn’t the easiest thing to do, especially when you’re a guy like Dubuisson, who was fighting off some of the best in the world in search for his first professional victory. He did what he needed to do as well, playing a steady round of golf and not putting himself in too much trouble. He made the turn after nine pars on the front, and the lead did shrink, with Rose making a charge after a front nine 29. In his own group, Poulter cut the lead to two shots after a front nine 33 and while Dubuisson never lost the lead, he did fall into a tie for it at a few points.

A bogey on the par-3 14th opened the door a little bit, especially after Donaldson birdied the 15th and then aced the par-3 16th to get to 21-under par. Dubuisson hit a long birdie putt on the 17th to take a one-shot lead over Donaldson, who got into the clubhouse at 22-under par. Taking driver out at the last, Dubuisson found the rough, but was able to hit a 2-iron just short of the green and after a solid chip onto the green, he was able to make his birdie and win the Turkish Airlines Open.

What The Win Means For Dubuisson

This is a life changer for Dubuisson, as it always is when a player can get their first victory. It’ll move him into the top-40 in the Official World Golf Rankings, and it gains him entry into the WGC events next season, and assuming he can stay inside the top-50 until the end of the season, which he should be able to, he’ll qualify for the Masters for the first time.

When I was watching the coverage over the weekend, I didn’t have the sound on at all points and I saw a ton of players back away from shots or stop mid-swing, most notably Tiger.

This story could explain what was happening. I’m all for fans being able to bring phones and whatever on the course, but it’s stuff like this that leads to the full bans and justified Twitter rants from guys like Poulter. If you’re at a tournament where phones are allowed, put it on silent and don’t use them at all when players are taking swings. It’s not that hard.

Quick thoughts on Tiger’s week: Obviously he played well to finish at 20-under par, but once again, the driver seemed to kill him. I tweeted this on Thursday, but it really is amazing that he can score as well as he does when hitting some truly terrible shots, and there might not be a better indicator of that then what he did to close his round on Saturday, making birdie on the 18th after hitting one of the worst tee shots you’ll ever see.

At least the miss was left this time, right? Well, he manages to find the first one, so the provisional didn’t come into play.

He gets himself out and into some light rough before hitting a decent approach into the green, but the putt was phenomenal.

The above GIF shows what ended up costing Olesen a stroke on Friday. Since he had no intention to hit the ball, he had to replace it at the original spot and take the penalty stroke. He would go on to make the double bogey putt, and he seemed to take it in stride after the round.

Shit happens!! Only thing to do is to learn from it …

@DaveLynndawg I think people would actually love too see that movie!

@DaveLynndawg we'll there is no chance for you with that face and body..

Just so you know, Thorbjorn translates to Thunder Bear in English, so he may already have a name if the whole golf thing doesn’t work out.