How can professional golf improve?

Yesterday at Devil Ball, Shane Bacon posted a piece on his ten things that he would like to see changed in professional golf. It’s well done and worth the read without question, and if you’re one of the few who has read my blog from time to time, you know that as much as I love the game, I’m of the opinion that it’s far from perfect and that we could definitely use some change. So, I’m going to comment on a few of Shane’s suggestions and then move on to my own. Feel free to leave some of your own in the comments, or let me know on Twitter what you would change if you were in charge. Shane’s suggestions will be in bold, with my responses below.

Walking rules officials in every group

The logic here is that with officials in every group, we’d run into fewer rules violations and maybe even minimize the amount of call-ins from fans who have far too much time on their hands. I really don’t see a downside to this to be honest, and realistically, this shouldn’t even be that hard to implement. Anything that would help minimize the effects of that naked eye rule is a positive, and at least one of those rules infractions that Tiger dealt with this year wouldn’t have been an issue. If he had the ability to call over a rules official instead of Martin Kaymer in Abu Dhabi, he probably would have avoided that penalty and that’s just one example of many that could be avoided.

This is a tricky one, and it’s something that we really haven’t had to deal with yet to date. As Shane notes, there’s been some talk that some players are considering skipping events like the Presidents or Ryder Cup because of busy schedules, and you know, they aren’t getting paid. Shane suggests that the players could have their spot in a major revoked for skipping, but I’m not sure I like that. As much as people may not like it these days, money talks. If the players are paid, they’ll show up. It’s that simple.

Bring Back the real Q-School

No argument here. There’s no way that anyone at the PGA Tour can convince me that the new way of qualifying, which you can read about here, is better than the old Q-School format.

I think we can all agree that slow play is a big problem in the pro game, but I’d love to talk to non-golf fans about this and see if it’s a barrier to entry for them with golf. I’m not sure that it is, but as Shane mentions, the worst thing about the slow play stuff is that it’s actually in the rule book and it is never called correctly. Instead, we get situations where a player like Tianlang Guan gets penalized at the Masters for it, and no one can believe it because he couldn’t have been the only player who was taking too long out there. All we’re asking for is some consistency and the players will adjust if they know there’s a real penalty attached.

The PGA Championship goes back to match play

My only problem with this is the same thing that Shane mentions: what happens if you get a terrible match up in the final? It’s one thing if it’s Tiger vs. Phil in the final, but Russell Henley vs. Scott Piercy isn’t what the PGA of America wants, but maybe I’m making too much of it. The finals of the WGC-Accenture Match Play over the last ten years are below:

Do something about the ball

This is obviously by no means a new idea, but it has become painfully obvious that the ball just simply travels too far. Most players these days hit driver from the tee and when they get to their ball in the fairway, it’s usually a short iron into the green unless we’re talking about a hole of some obscene length, which leads right in to the next big problem with the ball. Merion proved to be a stern test at the U.S. Open in 2013, but so many great courses have been made pretty much obsolete because they just aren’t long enough to give the pros enough of a challenge, and that’s a shame.

Go without the announcers occasionally

You know what the best part of the Tiger/Rory match in China was? That without the announcers and the players being mic’d up, we got to hear all kinds of interesting conversation between two of the best in the world. Granted, Tiger’s constant swearing would be a problem for the networks, but there are ways you can work around that. Plus, the player/caddie back and forth is always fun to listen to, especially when you get guys who know the game inside and out like Phil and Bones or Jim Furyk and Fluff Cowan.

The Golf Channel actually did this a few years ago for one round on the Nationwide/Web.com Tour and it certainly gave the viewer a brand new perspective on things. I’m not saying that it should happen every week, but for a round every now and then or let’s say an hour of each broadcast? I don’t see the harm in that, plus I think we can all agree that a break from Johnny Miller and Gary McCord from time to time would be a welcome change.

I admit this one is the least fleshed out of the suggestions, and Shane partially touched on it with his suggestions for more Match Play type scenarios with the FedEx Cup and PGA Championship, but the 72-hole stroke play format can sometimes get a little dull, right? Things like night golf, as seen below in an image from a course in Japan would be a twist on what we see regularly: 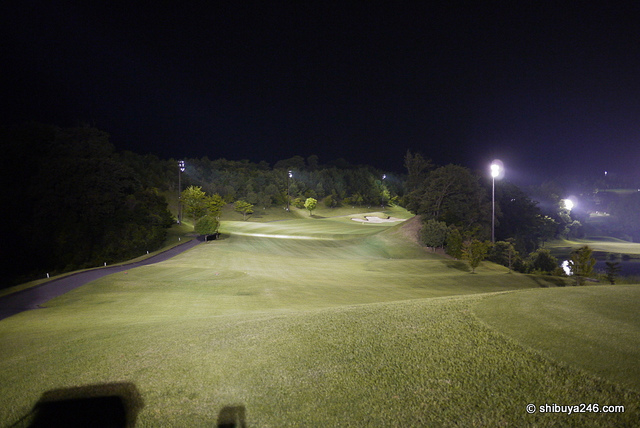 What about some one-club challenges? Take four players in a group and have them each select a club to play a full round with, and see what happens. Want to take a 3-iron? Good luck out of that bunker.

Elimination golf where if you lose a hole in match play, your competitor can take a club out of your bag? Ideally, I think the best spot for this type of thing is on YouTube where the PGA and European Tours wouldn’t have to disrupt their regular schedules for the sake of something a little different. Can you imagine Tiger, Rory, Adam Scott and Phil in a mic’d up one club challenge? Sign me up.

Lee Trevino once said that the rules of golf should fit on the back of a match book, and well, we’re nowhere near that. I like to consider myself as someone who knows the Rules of Golf quite well, but when the professionals themselves are constantly getting things wrong, that’s a problem. For every rule in the book, there seems to be another one that contradicts it, and then we get into situations like Tiger at the Masters and others where we’re arguing over whether or not a player should be disqualified.

Ideally, the PGA and European Tours would set up their own rules system instead of following the Rules of Golf, and with the Simon Dyson situation, it seems like the European Tour is already kinda doing that anyway. This is all pie in the sky thinking, but I can guarantee you that nothing makes golf look more ridiculous in the eyes of the general public than a spat over some rule that no one seems to understand or enforce correctly. It needs to be changed.

Go to some better courses

The PGA and European Tours go to some fantastic courses on a yearly basis, but for every Riviera and Le Golf National, there’s a Dove Mountain and a Four Seasons. I understand that it’s not easy to just say that we’re going to pick up a tournament and move it somewhere else, but man, some of these courses just need to go and the players are usually in universal agreement with which ones are the worst. With the way the ball and the equipment have changed the game, going to Cypress Point or even Pine Valley is probably out of the question, but surely there’s something that can be done to reinvigorate the schedules.

This to me is the biggest one of all, and it’s amazing to me that nothing has been done to fix this as we approach 2014. If a fan wants to watch Tiger Woods in a tournament, what do they have to do? They either have to go to the course, or they have to wait until the TV coverage comes on the air. What if Tiger, or their favourite player has an early tee time? Well, too bad because you’ve already missed them. With the amount of cameras on the grounds at tournaments these days, it makes zero sense to me that we can’t watch whoever we want, whenever we want online or with a mobile device.

Look at the advances of MLB.tv and similar products from the other major leagues, and you’ll see how far behind the times golf really is. Pretty much every shot from every player is recorded for highlight purposes on TV and online anyway, so why not make this available live? To start, you don’t even have to do it with every player, you can pick say the top fifteen or twenty guys based on popularity and charge people for the service. The actual rates can be debated, but let’s say the PGA Tour charges $50 for the ability to watch Tiger in every tournament, majors excluded, and you get the live camera views with the ability to switch between cameras if more than one is available for that group.

This is the ideal way to start pushing golf into the digital age, and more importantly for the PGA Tour, think about the amount of money it would bring in. I can’t see a downside to this in any way.

3 Comments on “How can professional golf improve?”