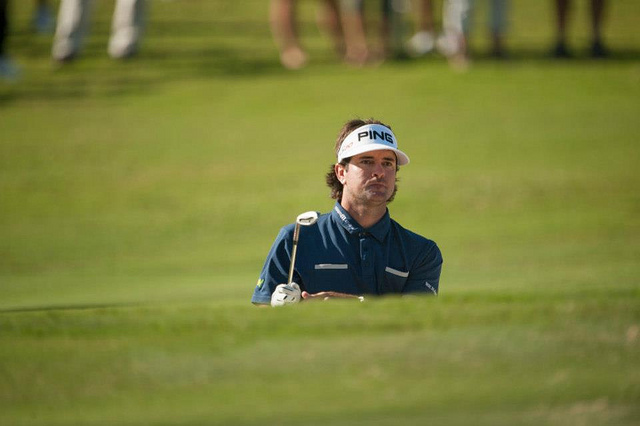 Bubba Watson was able to overcome a host of quality contenders on Sunday at Riviera to win the 2014 Northern Trust Open.

The final group of Charlie Beljan, George McNeill and William McGirt were given very little chance by most people coming into Sunday’s final round at Riviera, and apparently those people were correct. With a stacked leaderboard of big names chasing, including Watson, Dustin Johnson, Charl Schwartzel, Jordan Spieth and Monday qualifier Jason Allred, the leaders quickly faded and made way for the star attractions.

Watson led most of the way through the back nine after getting within four shots on Saturday with a third round 64. Johnson was within one for a good chunk of the back nine, but couldn’t close the gap at any point, while Spieth and Schwartzel fell further out of contention. Allred and Brian Harman, who played with Watson, kept it respectable, but Watson was too good down the stretch. With two putts needed to close the tournament, Watson stepped up on 18 and finished it off with just one.

Which made his son Caleb very happy:

What The Win Means For Watson

It’s the first win for Watson since he was able to beat Louis Oosthuizen in the 2012 Masters playoff, so you know that this is a big deal for him, and he was able to do it once again from behind. This is the fifth win for Watson in his PGA Tour career, and the fourth that saw him trailing entering the final round.

For someone with as much talent as Watson, you’d think that he’d have more than five wins at this point in his career, but consistency has been a major issue, especially since he was able to win that green jacket. Going into last season, Watson was considered a lock for Fred Couples’ Presidents Cup team, but he wasn’t playing well enough to make it on points and was never even mentioned as a consideration for a captains pick. Now in a Ryder Cup year, you know that Watson is going to want to make enough of an impression on American captain Tom Watson so he doesn’t get left out again.

Getting back in the winners circle is a big deal for him and for golf as well. Jason Sobel mentioned this on Sunday:

Golf needs more like Bubba Watson. Fans either love him or love to hate him. But they all have an opinion. Can’t say that about many others.

After the last tweet, my mentions are hilarious. Half of you saying you hate Bubba; half saying you love the guy. Which is exactly my point.

Yes, he has rabbit ears. Yes, he berates caddie Ted Scott more frequently than most players. But, he’s also a character in a game that doesn’t have many of them to begin with. Plus, you know, he’s pretty damn entertaining as a player, especially when he’s hammering the ball off the tee and moving it around every which way possible. The game is simply better with him in a prominent position.

Modern day designers could learn a lot from Riveira. Nothing quirky/tricked out. 5 under leading after round 1 and cut line at even…

Nothing much I can add to that.

Story Of The Week

He didn’t win, but Allred getting into the tournament via the Monday qualifier and then firing a second round 64, followed by a great weekend is exactly the kind of result that keeps players like him going. We often think of professional golfers as these guys who have an endless supply of money who get to play at all of these pampered sites around the world, but Allred is part of a far greater majority of tour pros who are just hoping to have that one week that can make the difference in their careers. With his top-10, Allred is going to be able to play in the Honda Classic in two weeks time.

Shots Of The Tournament

No idea how Brian Harman got it this close with that stance.

Dustin Johnson’s in there somewhere.