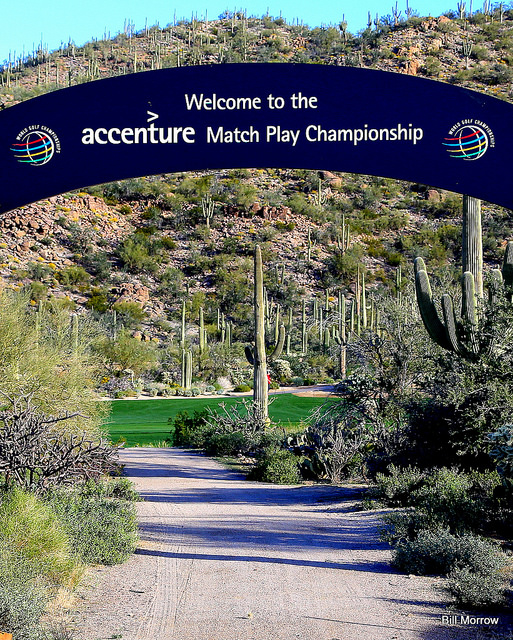 Sixty-four of the world’s best players are in attendance this week at Dove Mountain in Arizona for golf’s yearly match play event, and the first WGC of 2014, the WGC-Accenture Match Play.

There’s a lot to get to here, so we’ll do it in point form notes.

Okay, so let’s get to the course and examine a little bit of what we can expect, and why exactly the players find this place so loathsome. First off, it’s snowed there in two of the last three years, which led to this bit of embarrassing footage last year that I’m sure Steve Sands and Roger Maltbie wishes didn’t exist:

Maltbie and Steve Sands have a battle in the snow.

And another one. Live TV can be embarrassing sometimes.

Fortunately, it’s not supposed to snow this year, so hopefully the venue can avoid that in the last year that they host. So, why do the players hate the course so much? It’s appealing to the eye from afar without question, but it was rated as the second worst PGA Tour venue when Golf Digest polled the players. The Nicklaus design is considered a good match play course thanks to the many risk/reward holes, with reachable par-5’s and drivable par-4’s, but the massive greens are usually where the issue is. Nicklaus tricked them out to the point of being ridiculous, with so many undulations that even the pros have difficulty reading them. Of course, the awful weather that has hit the course over the years hasn’t made it any more likeable.

When asked about why he wasn’t playing, Scott admitted that a venue change would likely have him reconsider his appearance and that probably goes for other players as well.

I know I said above that the match play is a crapshoot, and it generally is. However, I do have a few suggestions for what you can play going into tomorrow’s first day of action.

Ignoring last year’s first round loss to Lowry completely, as it was only his second start with new gear. He’s been solid in every start since October and I think it’s time for him to grab another win. The only thing that makes me a little wary is that the Ben Hogan Bracket is the proverbial bracket of death. He’s going to have to dodge some big bullets, but I think he gets it done this week.

I love Stricker, but he hasn’t played since the Tour Championship and he’s been very preoccupied with some family matters. Coetzee hasn’t finished outside the top-5 in his last three starts, and he finally got that first European Tour win in his last event, winning the Joburg Open.

I know it’s a small sample size, but Haas has never won a singles match in his career, plus Jimenez has gone deep here in his last two starts. I know Jimenez has missed his last two cuts, but I like the Mechanic to pull the first round upset before losing to fellow Spaniard Sergio Garcia in the second round.

The only thing that’s making me pause here is that Kirk has never played the course, and Furyk has seen it plenty. I just think that Kirk is a better player at this point in their careers, so I’ll take the shot on him as an underdog against Furyk.

The Sam Snead Bracket might be the second most difficult next to the Hogan Bracket, so Matsuyama will have to do some work against some tough competition, but he’s playing well and there’s an argument to be made that he’s the most talented guy in his bracket. He hasn’t played the course before, but that hasn’t been an issue with him in his PGA Tour career to date. I don’t think he wins the whole thing, but I think he gets out of his bracket.