Paulina Gretzky is a good looking woman. Golf Digest is in the business of selling magazines and subscriptions. These two are undeniable facts, and so it stands to reason that putting Gretzky on the cover of Golf Digest, scantily clad with a loose affiliation to golf, would be a good business move for the people at Golf Digest. 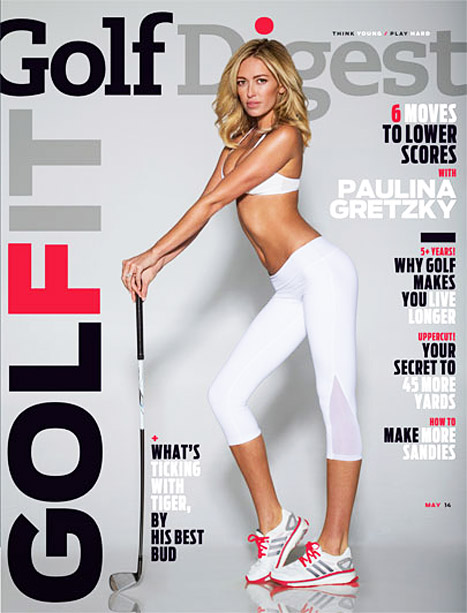 The reaction to the cover has been interesting to say the least. LPGA players, who are at their first major championship stop of the year this week, are not impressed in the least, suggesting that a golf publication that has only had one LPGA player on the cover since 2008 should be doing more to promote all of the quality female players in the world. In the same article linked above, Golf Digest editor in chief Jerry Tarde responded with this quote:

“ Sports figures, celebrities and models have appeared on Golf Digest covers since the magazine’s beginning. Paulina ranks at the high end of the golf celebrity scene today, and she has a compelling story to tell. She also might get some new people interested in the game. ”

Obviously we’re disappointed and frustrated by the editorial direction (and timing) Golf Digest has chosen with the announcement of its most recent magazine cover.

If a magazine called Golf Digest is interested in showcasing females in the game, yet consistently steers away from the true superstars who’ve made history over the last few years, something is clearly wrong.

Inbee Park wins 3-straight major championships in 2013.  Stacy Lewis, in 2012, becomes the first American to win Rolex Player of the Year since 1994.  Lexi Thompson and Lydia Ko set historical benchmarks while blossoming as the Tour’s youngest ever champions.  And evidently, not one has been “cover worthy” for Golf Digest.  “Growing the game” means a need for more role models and in these exciting times for women’s golf, the LPGA is overflowing with them.

At this point, I’m done talking about it and I hope the attention of the media and fans will shift in the proper direction.  The true stars representing women’s golf have a grand stage this weekend at the Kraft Nabisco Championship.  I’m confident that the year’s first major championship will result in another compelling champion and the traditional Sunday leap into Poppie’s Pond will grab the media spotlight it so deserves.

As mentioned above, it makes great business sense and it should sell more copies than a standard issue or even a fitness issue if a male was placed on the cover. In fact, current LPGA Tour player and Golf Channel analyst Paige Mackenzie made that argument on Morning Drive yesterday when debating the issue with Matt Ginella. Holly Sonders, who was on the cover for last year’s fitness issue, weighed in this morning, expressing disappointment at the reaction from everyone, saying that Golf Digest is in the business of selling magazines.

I have no issue with Paulina Gretzky being on the cover of Golf Digest, much like I had no issue with Holly Sonders being on it last year, but I do think that Golf Digest is trying a little too hard to justify their decision. Did they think that having Gretzky on the cover would potentially grow the game and get new people interested? They probably did, and on some level, they’re not wrong. There are going to be some people who pick up the issue in a couple of weeks who might not have ordinarily picked up a Golf Digest, but considering that they are in the magazine selling business, I find it hard to believe that their first thought wasn’t that sex sells.

Golf Digest does a great job of covering the game at all levels, including women’s golf. They have numerous examples on their site of feature stories on players like Lydia Ko, Lexi Thompson, Stacy Lewis and others. They don’t need to say things like Paulina “has a compelling story to tell” because really, from a golf perspective, she’s a beginner just like a lot of people, and outside of that, her only real connection to the game is that she just happens to be engaged to a very good player in Dustin Johnson. The compelling story to tell is a reach at best. As Bomani Jones says in the video above, don’t try and suggest that this is about golf and not something else.

Mike Whan had to release a statement supporting his players, and from his angle as commissioner of the LPGA Tour, he has a right to be upset. He needs to look out for his tour and the women’s game in general, and if he doesn’t say something, he looks like he doesn’t have the best interests of the LPGA in mind. As someone pointed out to me, being on a magazine cover isn’t a right, and if the players on the LPGA Tour want to protest the cover, maybe they shouldn’t be apart of the magazine the next time they get asked, but really Golf Digest needs to do everything in their power to stay in business. If they think using a celebrity instead of a golfer helps them accomplish that, I can’t really blame them for that line of thinking.

Golf Digest did nothing wrong in putting Paulina Gretzky on the cover. I just wish they would have said something like “Yeah, you know why we put her on the cover. Deal with it.” Anything else is dishonest, and makes them look like they’re hiding something.