Mo Martin dances in the fairway after nearly holing out for a two.

It was a busy week in golf, with two major championships held and players from both the PGA and European Tour getting ready for the 2014 Open Championship. Mo Martin eagled the 18th to capture her first LPGA Tour win at the Women’s British Open, Colin Montgomerie, ironically, can’t stop winning majors on the Champions Tour, and Brian Harman was able to grab his first PGA Tour win at the John Deere. Lastly, Justin Rose continued his hot run, winning his second consecutive tournament at the Scottish Open. The best photos, GIFs and videos from the week are listed below.

Fox on fox carnage in Scotland.

The double club point from Marc Warren and Kristoffer Broberg.

Shane Lowry with the near holeout.

Russell Henley muscles one out of the rough. 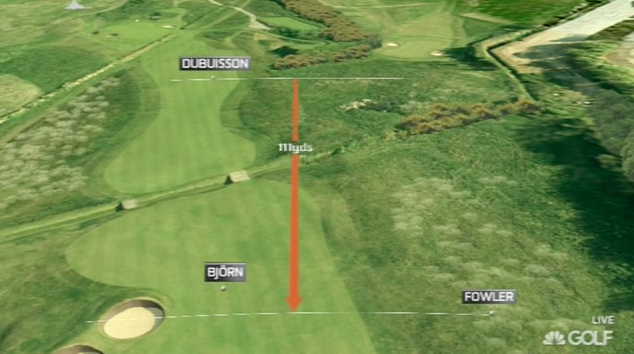 Bit of a difference here between Victor and Rickie.

The most emotion ever seen out of Ernie Els.

Tyrell Hatton seems to be a very expressive player.

He’s mad at something.

The club twirl from Rory.

Final round highlights of Harman’s win

Matteo can’t stay on his feet.

Justin Rose seals the win with this putt.

Phil from the cart path.

Mo Martin’s near double eagle from the fairway on 18 at Royal Birkdale.

She hits the final putt for her first major win.