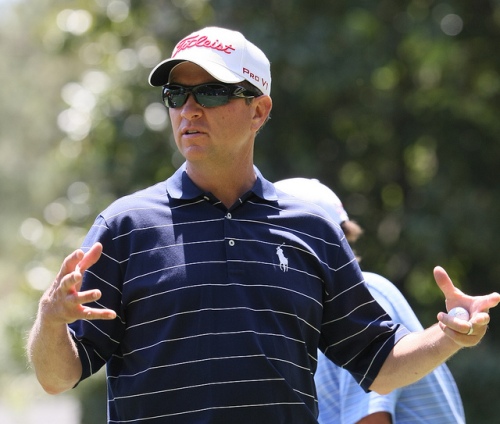 After months of speculation and task force meetings, the PGA of America have apparently decided who will lead Team USA at the 2016 Ryder Cup at Hazeltine. Tim Rosaforte is reporting that Davis Love III will be back for a second term as captain, four years after his last appointment when Team Europe staged an incredible Sunday charge at Medinah, stunning Love and the Americans by erasing a four point deficit on the final day and matching the largest ever comeback in Ryder Cup history. Love takes over from Tom Watson, who is still recovering from being thrown under a bus at Gleneagles, and will be the eighth repeat captain in U.S. Ryder Cup history.

When news of Love’s appointment broke on Monday night, I was shocked and it had absolutely nothing to do with Love himself, who by all accounts is admired by pretty much everyone in the game and unlike Watson, played a relatively minor role in the loss at Medinah. My shock was more that they decided to go down the path with someone who lost so recently in such devastating fashion, and that unlike other names such as Fred Couples and Paul Azinger, Love’s name wasn’t really out there aside from the fact that he was one of the members of the 11-man Ryder Cup Task Force. When you think more about it though, it starts to make sense, at least from the angle of the PGA of America.

Watson was a name brand, Ted Bishop play plain and simple. In an attempt to end the disastrous run by the Americans in the Ryder Cup, Bishop tried to hit a home run, asking a verified legend to come in and will his side to a win with an old-school mentality and toughness and it failed spectacularly. Watson was handcuffed from the start with a lackluster roster compared to the Europeans and further compounded the problems by making odd decisions and being far too rigid in his attitude toward the players and media, and before they had even left the grounds in Scotland, Watson’s reputation was the only thing beaten worse than his twelve player roster.

Azinger, who many pined for after winning in 2008 with his pod system, apparently wanted nothing to do with the job and you can hardly blame him. He’s got the lone win in this event for his country this century and there’s no doubt that the Americans, as flush with young talent as they may be, are in a period of transition with Phil Mickelson, Tiger Woods and Jim Furyk far from having guaranteed spots at Hazeltine. Azinger supported bringing Love back, and while the players apparently wanted Couples, he likely didn’t do himself any favours by talking about how the task force was unnecessary and mentioning that he wasn’t “a PGA of America guy.” Aside from doing something a little off the board like asking Larry Nelson, who is probably further out of touch with today’s players than Watson, or bringing in a current player like Justin Leonard or Mickelson to do the job, having Love to take the reigns again seems like the most logical play from this group.

Personally, I would have asked Couples just because he’s talked about how he was interested and even though it was the lower level Presidents Cup, it seems foolish to dismiss his perfect 3-0 record against the Internationals. Throw in the fact that the players clearly love him and he seems like the guy that makes the most sense, but there is one simple thing to remember when discussing the value of a captain in this setting.

Match play is a crapshoot. The difference between a random PGA Tour pro and the very best players in the world over one 18 hole match is pretty much non-existent. Over a full season, sure I’ll take Rory McIlroy over Webb Simpson every time, but in a one off match over 18 holes, it’s not as simple as just saying that Rory wins because he’s the better player and even though Europe has had the upper hand for most of the last twenty years, it hasn’t been as lopsided as the record indicates. One shot here or there, or a bad bounce or lip-out easily sways a match and goes down as a point won or lost just the same as a player getting Ames’d. For example, see this tweet from the guys at No Laying Up on what happened at Medinah:

Here's how close DL3 was to leading the US to a win in 2012. I can see why he was picked: pic.twitter.com/XMmnWzOEdi

Bizarre if Ryder Cup logic goes Love = Bad Captain, Olazabal = Great Captain only because of an inspired singles showing. Not the reality.

This tweet from Ewan Murray sums it up best, I think. The role of the captain at the Ryder Cup is to put your team in the best possible place for success. Love did that at Medinah and it didn’t work out, while Watson very clearly didn’t do that and unsurprisingly, it didn’t work either. The PGA of America tried to hit the home run with Watson and it didn’t work, so they went with the safe, reliable play in Love but all of it will mean nothing if the players don’t perform better at Hazeltine and get a little bit of luck along the way as well.

It wasn’t the move I would have made, but I understand why Davis Love will be leading Team USA in 2016.