When you look back on 2015, the amount of stories that emerged over the past twelve months is pretty crazy. We had brilliance on the course from players like Jordan Spieth and Jason Day, arguably the best major season in my lifetime, Phil Mickelson being the most Mickelson he’s ever been, and unfortunately, what appears like it could be the real beginning of the end for Tiger Woods even though I would never really count him out of anything. Golf is in a great place as we head into 2016, but before we get there, let’s take a look back at 2015 through sixty (yes, sixty) stories that caught my eye over the last twelve months.

You may not remember it because it came and went faster than Conor McGregor knocking out Jose Aldo, but there actually were brief moments of Tiger Woods playing pretty well in 2015. It’s sad that this is where we’re at with him, and we will get to the other stuff shortly, but what makes the poor play and health concerns even more frustrating is that he actually showed flashes, namely at the Masters where he was in one of the final few groups on Sunday with Rory McIlroy, and at the Wyndham with shots like these:

There's a smile. Tiger caps off a shaky round with an unbelievable flop shot. #QuickHits http://t.co/C9knd4Tl59

As we all know, these moments didn’t happen often enough though and we have no idea what to expect going forward, but it was still nice to see some quality play even if it was in such a small dosage.

This whole thing was ridiculously entertaining because of a few reasons. First, you never see golfers go nose to nose like they did because really, there’s never any reason to do it. Even in match play where you’re going head to head, there usually isn’t a situation where you feel the need to lay down the law. All we needed was Slugger White to jump in the middle like Vince McMahon and we would have been in full party mode.

Secondly, of course this happened with guys like Keegan and Miguel, who love them or hate them, are two of golf’s most colourful characters and a guy who prefers to be called Pepsi. Third, the idea that Miguel clearly didn’t trust Keegan to make what should be the most routine of drops is amazing to me, and sure it’s match play, but what’s he doing over there? It was probably just an attempt at gamesmanship on Miguel’s part because there’s no way that Keegan doesn’t know how to drop there, and hey, maybe it worked because Miguel ended up winning the match and if you happened to look up at the sky on the day that this happened, I’m pretty sure that you could see a giant smile on Seve’s face.

The only thing that would have made this better is if Miguel made a crack about Keegan’s Ryder Cup suitcases.

The PGA of America ended up cancelling the made for TV event completely in September, but the fact that earlier in the year they decided to “mutually” move the event from a Donald Trump owned course due to the backlash around his comments about Mexicans was a big deal and it’s only going to get bigger. Trump, for better or worse, has invested a ton of time and money in golf when a lot of others have decided to back away and there’s an argument to be made that if he would just keep his mouth shut, he’d actually be really good for golf. Of course, expecting Trump to keep his mouth shut is like expecting the R&A to announce that the Open Championship is moving exclusively to Kuwait, so the golf world is going to have to make a decision on where they stand with Trump and it’s not going to be an easy one considering how tied they are to him already, but it appears that one governing body may have already made their decision. I feel like this will be much higher on the list in the 2016 Year in Review, so keep an eye on it. Also:

Tour should move the Doral event regardless of the Trump stuff. The course is an abomination and a testament to what ails the game.

Back in July, the PGA Tour suspended Scott Stallings for violating their anti-doping policy. Stallings reported it himself to the PGA Tour after a meeting at Torrey Pines because he became concerned that he may have done something wrong, and on March 23rd he was notified by the PGA Tour that he had indeed violated the program. He joined Doug Barron and Bhavik Patel as the only golfers to serve suspensions for PEDs, but to this day, there’s one thing that still doesn’t make a ton of sense to me.

Just seems a little strange to me that Stallings was allowed to make eight additional starts after being told that he violated the program.

Was Stallings appealing the decision? Maybe, but he turned himself in, so you’d think that he wouldn’t have much of a leg to stand on in terms of not getting the boot, so why was he still allowed to play on tour after being told that he had violated the program? Those eight starts prevented someone else from getting into those eight events, and even though I’m sure there’s an explanation for it, I don’t think we’ve ever really gotten one from the PGA Tour. To me, this story is less about the fact that Stallings got suspended and more about the idea that he was still apparently able to play while under suspension.

The 2015 Presidents Cup was a lot of fun, and a big part of why it was so fun was because Phil Mickelson was involved heavily. He hit insanely good shots:

Players were rubbing his belly for luck:

And he was still being the most FIGJAM of all FIGJAMs:

But all of that pales in comparison to the fact that Phil caused himself and Zach Johnson to lose the a hole TWICE because he put a new ball into play that he thought would help him more on the par-5 7th.

Obviously Phil broke the rule and needed to be punished for it, but the idea that it only applies in certain situations and that the walking official didn’t understand it initially either tells you all you need to know about the rules of golf. I’m still trying to figure out how you can lose a hole twice, which completely changes the standard dormie rules and throws everything out of whack, but let’s take a second to appreciate the fact that Phil actually had two balls in his bag for this situation just because he thought it would give him an advantage. As Graham DeLaet said:

@BobWeeksTSN imagine being a professional golfer and having 2 different types of balls in your bag. That's more bizarre than the ruling. 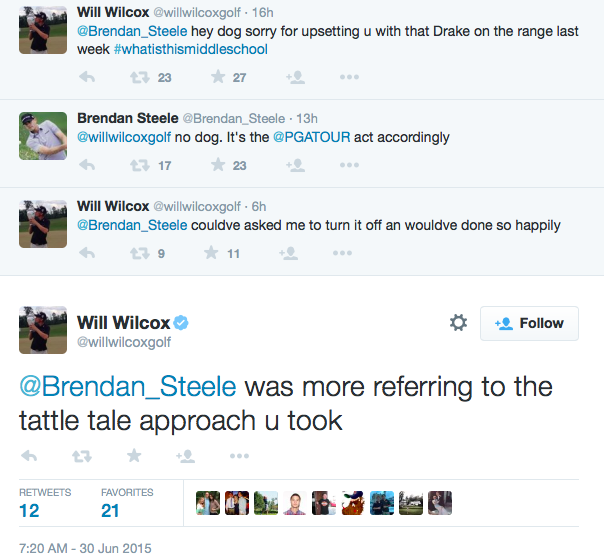 I have so many questions about this. What was the tattle tale approach? Would Steele have preferred something else? Is he a Meek Mill fan? Was Wilcox just blasting it on the range because he thought everyone would enjoy it?

If Steele had come back at any point in the thread with a “Well, at least my balls aren’t yellow”, Twitter may have actually burnt to the ground and I’m really disappointed that it didn’t get to that point. Still though, Wilcox got that Drake shout out, and for some reason, he hasn’t changed his handle to Wave God Wilcox which is the real shame of this whole saga.

Wave God Wilcox going way up on the range every time. 🙏⛳️

This wasn’t the first time that Phil was involved in some financial scandal and it blew over pretty quickly, but it is worth mentioning. ESPN reported that $3 million of Mickelson’s money was transferred to an intermediary as part of “an illegal gambling operation which accepted and placed bets on sporting events.” The important thing for Mickelson was that he was never charged, nor was he ever under any kind of investigation and he handled the whole thing pretty well, issuing this statement back in July:

Thumbs up for everyone.

After winning the first two majors of the season, Jordan Spieth had a real chance to take the Grand Slam and for the last few years, the general thought amongst tour pros is that heading over the week before the Open Championship to play in the Scottish Open is the best possible way to prepare for the season’s third major. Spieth, however, didn’t see it that way and decided to stay in the United States and play in the John Deere Classic instead, the site of his first PGA Tour win back in 2013. Spieth clearly wasn’t concerned about the jet lag or the extra practice around the Old Course, a place that he had never been to and he ended up winning the JDS, taking extra holes to do it in a playoff against Tom Gillis. Sure, he won the tournament, but how would that carry over? Wouldn’t he be confused and tired? Well, he finished tied for 4th and missed out on the playoff by a single shot, proving that he was just fine.

Going forward, I’m sure that he’s going to pare his schedule down a little bit and some of the events that gave him his higher profile or exemptions may fall by the wayside, but it’s hard to argue with Spieth wanting to show up to the place where he got his first win and it clearly didn’t affect him in any way, despite what some might have you believe.

Read this piece by Ryan Lavner and know that we’re dealing with a very, very unique young player, who tackles the game in a completely different way than we’ve ever seen. He can play, and we’re going to be hearing a lot from this kid in 2016.

We’ll end off part one on a sad note, as golf lost some great players and figures in 2015.