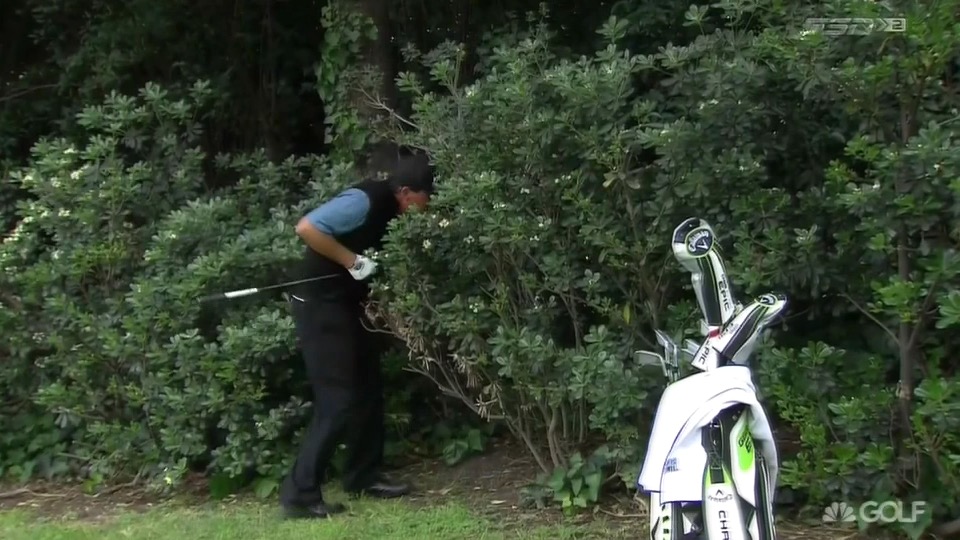 There’s an argument to be made that no one in the modern era, Tiger Woods included, has provided golf fans with more entertainment than Phil Mickelson. He’s won forty two times on the PGA Tour, five of which have been major championships, set numerous records while chasing history and along the way, suffered more high profile heartbreak than any other golfer could possibly fathom.

Granted, most of that heartbreak has been his own doing. When you play the way Phil does, aggressive to the very end with little regard for where the ball is going, you’re bound to have your fair share of blowups, even if you’re a talented tour pro. That same mentality has also led to moments of sheer brilliance, the likes of which the golf world hasn’t seen since Seve Ballesteros.

Even now at age 46, Phil is providing golf fans with a level of entertainment that remains unmatched, and there’s no better example of that than the show he put on for everyone on Saturday at the WGC-Mexico Championship. Looking for his first win since the 2013 Open Championship, Phil entered the day two shots back of Rory McIlroy, and at the end of it, he was still two shots back (this time of Justin Thomas) after a 3-under par 68. If you just looked at the scorecard, you wouldn’t really see anything too noticeable, but those who watched were treated to maybe the most “Mickelson round” of all time.

It started on the first hole, which is a drivable par-4. When you combine the altitude with a downhill 322 yard hole, pretty much everyone is going to go at it, as evidenced by Dustin Johnson having no trouble landing the ball hole high with a 2-iron. Just a few minutes later, Mickelson stepped to the tee and went at it, sending it about fifty yards over the green in what seemed like a near impossible position.

You see that big tree just behind the -7 graphic? Phil decided to go over that tree, which is only about fifteen yards behind the green, and while he didn’t land it on the surface, he made up for it by holing the chip for a birdie. He would hole out again from just off the green on the par-4 4th hole, and would end up finishing the front nine with a 33, and with no one else really making much of a move, Phil was in contention but the fireworks were just beginning. On the 10th, Phil hit his ball approximately 8912 miles left and despite his best efforts, they couldn’t locate the ball, but thanks to some helpful fans, they determined that a spectator picked up the ball and took off, meaning that Phil was entitled to a free drop. As much of a good break as this was, Phil didn’t exactly have a ton of room to hit a good shot because again, he basically managed to almost miss Mexico from the tee. This is a problem, right? Well, not exactly. As you can tell by where Phil’s head is, he’s going over those trees and back into play, and well, this happened:

Ridiculous. He would go on to miss the putt (of course), but still made a pretty crazy par and the best thing is that we’re not even close to being done here, as the next two holes featured more Phil magic. On both the 11th and the 12th, Phil managed to blow his drives into the trees, which isn’t really news, but somehow, he happened to find sprinkler heads right where his ball ended up. The ensuing conversations with Slugger White, captured beautifully by NBC, was Phil at his finest and he managed to get a favourable ruling in both instances, leading to relief on three consecutive holes. The video below shows most of Phil’s craziness from Saturday, but the rulings on 11 and 12 start at the 36 second mark:

He never ceases to amaze. pic.twitter.com/YQhA87pf3B

I’m convinced that there’s no situation Phil couldn’t talk his way out of, and even if other players are in that same situation, I’m not sure that they get that same ruling. Go back and listen to the emphatic tone in Phil’s voice when he’s explaining his situation to Slugger White. There’s zero chance that he’s not going to get the ruling to go in his favour, and everyone watching the broadcast knew it. It was tremendous theatre. Later on, Phil would go on to make par on the 14th after blowing another drive way left and hitting a tree with his second shot, and with that, it was pretty much the end of the craziness. At the end of it, Phil went three for three on rulings, and hit four fairways and eight greens (!!!) en route to a 68 that honestly made zero sense, which Rory touched on with some quotes to ESPN’s Bob Harig after the round.

This guy is 4-under today. pic.twitter.com/6Z2W5xWito

After he played from a parking lot last year at Torrey Pines, I wrote about how we needed to appreciate Phil because at his age, we don’t know how much gas he really has left in the tank. It’s clear that he still has plenty of game, but we also know that golf doesn’t treat players well at the elite level once they get to a certain age, and Phil is certainly reaching that point. In all of the years that I’ve been watching Phil, I can honestly say that I don’t think I’ve had more fun watching him play a round of golf than what we saw on Saturday in Mexico. Phil played all of his greatest hits. It was this strange mix of Seve Ballesteros, Harry Houdini and Nathan Drake all rolled into one, and best of all, he managed to do it while staying in contention. He has a chance to win this thing on Sunday, and if he does, it would be a tremendous accomplishment as we get closer to the fourth anniversary of his last win. Regardless of the outcome though, Saturday is something I’ll never forget and there’s only one man who could pull it off.