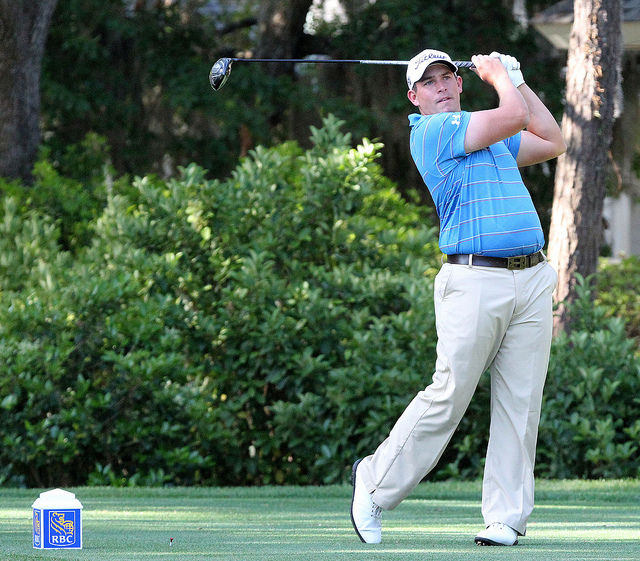 Scott Stallings was able to outlast a dozen of contenders on a jam-packed leaderboard in Sunday’s final round at Torrey Pines to pick up his third PGA Tour win at the 2014 Farmers Insurance Open.

With Tiger and Phil out of the picture for Sunday, CBS needed to hope that something exciting would happen with the leaderboard and that’s exactly what they got. At one point, there were 19 players within two shots of the lead, which was stuck at 8-under par for most of the day with the final group of Gary Woodland, Jordan Spieth and Marc Leishman constantly hovering around the number.

K.J. Choi was the first to apply some pressure, getting into the clubhouse at 8-under par after a 6-under par round of 66. He would be joined later by Jason Day, Graham DeLaet and Pat Perez, while Scott Stallings was just going along quietly with a four-under par round, getting him to 9-under par total as he got to the par-3 16th. He would go on to bogey that hole, but was able to make par on the difficult 17th, and after just clearing the water fronting the green on 18, a two-putt birdie followed along with a final score of 9-under par. Behind him, the final group was beginning to struggle on Torrey Pines’ tough closing stretch.

Spieth would be the first to crumble, with bogeys on three of the final four holes and firing his second of back-to-back 75’s after a stunning second-round 63 on the easier North course. Woodland’s day was all over the place, with it finally killing him on the 17th after a horrendous drive into trees and bushes. A short bogey putt would be missed as well, leading to a double bogey and a final score of 6-under par. Leishman wasn’t doing anything wrong necessarily, but he also wasn’t making a charge in the final round. He needed to hole out for eagle on 18 to force a playoff with Stallings, and his approach was great, but it didn’t drop, giving Stallings his third PGA Tour win.

What The Win Means For Stallings

As Peter Kostis referenced in their post-tournament interview, the win guarantees Stallings a spot in the Masters, which is obviously a pretty big deal and Stallings actually joins a pretty exclusive club on the PGA Tour with the victory:

According to CBS the only golfers under the age of 30 with 3+ PGA Tour wins: Rory, DJ, Keegan, Webb, and Anthony Kim (!)

Of course, the list does get longer if you include the European Tour, but it’s still impressive that Stallings is now in that group, especially when you consider that he’s never mentioned in the same breath as those players. Also, Anthony Kim!

The win also moves Stallings to 53rd in the Official World Golf Rankings, which while not safe for the WGC-Match Play, he’d have to play pretty poorly from here to miss out. Also, the just over $1 million in earnings doesn’t hurt, and I think we’re probably reaching the point with him where he’s one of the most, if not the most, underrated player in the game today.

Regardless of who won this week, the main focus for many in the golf world unfortunately was always going to be on the game’s two biggest American stars and what happened earlier in the week. We’ll start with Mickelson, who had to withdraw after Friday’s round with a back problem, and nearly withdrew after an opening round 3-under par 69. Much has been made about Mickelson’s attempt at cutting down his schedule in 2014 in order to focus on the majors, especially the U.S. Open, so him withdrawing really makes a ton of sense.

It’s only his fourth career WD, and now the focus shifts to next week where he was supposed to be defending his title at the Waste Management Phoenix Open, site of his near 59. His management team says that he’s going to try and be there, but nothing has been confirmed as of yet.

Saturday’s big storyline was the play of Tiger Woods, who struggled to a 79 and missed a secondary cut for the first time in his PGA Tour career. The interesting thing is that it didn’t start out that bad for Tiger, especially when you consider how tough the course was playing this week (more on that in a second), and I think I can pinpoint exactly where it all went wrong for him.

Tiger started on the back nine and was going along in 1-under par for the day, 2-under for the tournament as he got to the par-5 18th tee. He hit his drive in the middle of the fairway, and decided to go at the water guarded green in two with a wood, as he has done many times at Torrey Pines in the past. This is what happened:

Instead of potentially setting up an eagle putt, which if made could have putt him within striking distance of the lead, Tiger would go on to make a double bogey and fall back to even par for the tournament. After that, another double came followed by five straight bogeys, a run that just doesn’t make much sense for Tiger at any course, much less the one that he’s won on eight times. He’s been accused in the past of mentally checking out in the middle of bad rounds, and that’s certainly what seemed to happen on Saturday. After finally making a birdie on the seventh, he was having a little bit of fun with his situation.

So, why did it happen? It’s a combination of things really, and while he wouldn’t call his opening round 72 rusty afterwards, that probably plays a big part in it. Remember that last year Tiger played in Abu Dhabi to start his year, missing the cut after incurring a two-stroke penalty in a tournament where he looked awful rusty. He hasn’t played since Zach Johnson bested him at Sherwood over a month ago, and it doesn’t matter who you are, it’s going to take some time if you’re not playing tournament golf on a regular basis.

This doesn’t change a single thing in terms of his overall outlook for the season. He’s going to win a few times, and should be considered a favourite everywhere he goes, starting next week at the Dubai Desert Classic.

Coming into the week, several players had mentioned that the course was looking very much like the one they played back in 2008 when the USGA toughened up the layout ahead of the U.S. Open, and watching the coverage on Saturday, you could see exactly what those players were talking about. Thick rough and firm greens were making scoring very difficult, reducing many in the field to severely bloated scores that made them look like regular weekend hackers. The greens were apparently watered prior to Sunday’s final round, which helped with making it a little easier, and I’m sure that it happened because of the amount of complaints being made.

I’m all for occasional toughness on these guys, and I do enjoy seeing them pull off sublime shots in what appears to be near impossible situations. Lord knows we don’t need more weeks like the Humana. However, when that thick rough is right beside the fairway and around the greens at all areas, it doesn’t do anything for anyone. The players hate it, and the fans almost always want to see guys go out and make birdies, which was nearly impossible on some holes this week.

With the field being as loaded as it was this week, I don’t think the tournament is in jeopardy of losing star power just yet, but if it keeps going this way, you can’t rule it out either.

Spieth says he injured his right ankle sometime Friday. Had it wrapped all weekend. Couldn't swing like he wanted.

Spieth: "My ankle is pretty messed up." Hurt it Friday, doesn't remember where, how. Stopped loading onto his right side