Rickie Fowler was able to hold off a world class field at the Abu Dhabi HSBC Golf Championship on Sunday, giving him his second win on the European Tour and fourth worldwide in the last nine months.

Fog was the big story early in the week, as both the second and third rounds were delayed to start due to the conditions, leading Fowler and many others to have to complete their third rounds on Sunday prior to starting the final eighteen. After that was complete, Fowler carried a three shot lead over Thomas Pieters, and he extended it early with birdies on his first two holes but after a run of pars, Fowler came back to the field in a big way with a double bogey on the par-3 7th thanks to firing one over the green from a waste area, leading to a tough lie with his third shot.

He actually recovered nicely and almost salvaged a bogey, but his lead was cut to one. Things weren’t looking much better on the par-5 8th either, as he took driver off the deck and sent his approach shot into the bunker and it appeared that he was heading for a par on a gettable hole, until…

The hole out for eagle gave Fowler back the strokes he lost on the previous hole, but another string of pars allowed Pieters and a few others to get back in the hunt, but the chase ended on the par-4 17th when Fowler managed to chip in again from off the green.

This restored his lead back to two shots and despite Pieters making birdie on the par-5 18th, it wasn’t enough and Fowler came away victorious in his second start of 2016.

What The Win Means For Fowler

We’ve come a very long way from last May when Fowler was crowned as the most overrated player on the PGA Tour by his peers. He’s won four big events, and with this win, he moves into fourth in the Official World Golf Rankings and I would hope that if there was anyone left prior to this tournament that thought he wasn’t one of the world’s best, that those people have quickly reversed course on that opinion. Jason Sobel did a good job outlining the reasons why in his recap for ESPN, and there’s no reason why Fowler can’t take the next step (major wins) this season, and along with Jordan Spieth, become the two defining faces of American golf. I’m not betting against him, and you shouldn’t be either.

Jordan Spieth says he's 'beat up, mentally and physically' due to his hectic schedule. https://t.co/yF83xsARmc pic.twitter.com/fCthqissJG

Jordan Spieth had a good week, finishing in a tie for fifth at 11-under par, and five shots back of Fowler but I thought his comments in the above article were interesting. People will say that it shouldn’t be that tiring to play golf for a living, and some already have if you look at the responses to the tweet, but the quotes reminded me of a conversation that Tiger was having with Rory a few years ago when they were playing their one on one match at Mission Hills. Rory was talking about how he wanted to start cutting down on his schedule because he felt worn down and now as sharp at certain points during the season, and Tiger told him that he went through the same thing early in his career as well and that at a certain point, you have to realize that you can’t play everywhere and expect to stay on top of your game. This could be something to watch as the year goes on.

One bounce and in! https://t.co/S81OJPCakC

What do players do during fog delays? Have a chipping competition of course. Winner: @ByeongHunAn. pic.twitter.com/jPcCbpD68S

You have a caddie who practices putts with the flag? Matthew Fitzpatrick does.

Rory with the delayed club drop.

Rory with a club point, with assistance from Ian Poulter. 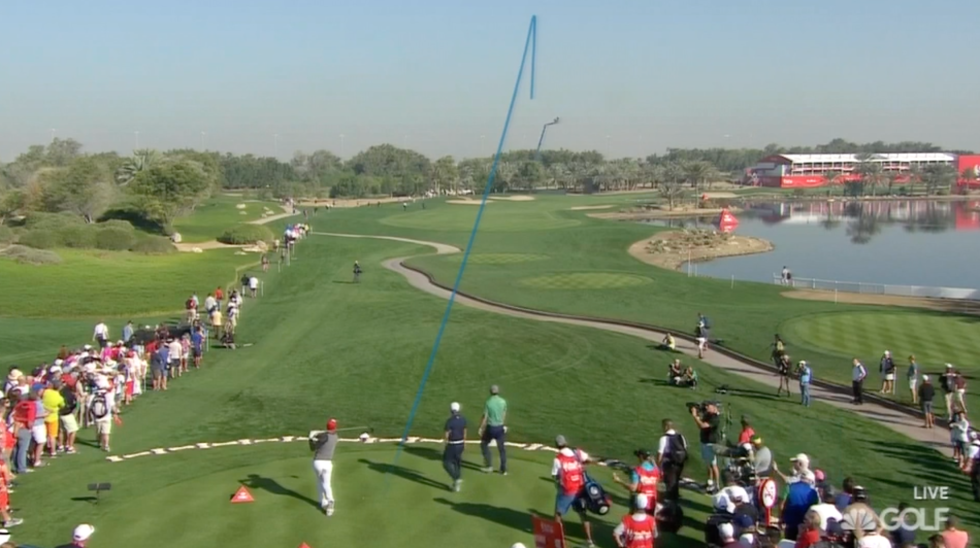 New angle on 18, and Rory’s perfect to show it off.

Jordan’s so good that he can send the tracer out without hitting the ball.

Fog lifting over the first tee this morning. #ADGolfChamps https://t.co/ckIolh84CI

When you know you've hit it close. pic.twitter.com/RH3AWeor6H

Henrik Stenson is a monkey.

When you tee off just before the horn… https://t.co/8Qla8vqBWD

Rory in the trees.

Someone in the background LOVED the birds-legs joke. So great. https://t.co/eLZPXtYwkU

This was Rory’s whole week, and he still finished only two back.

The aforementioned Qatar Masters is coming up, and it starts a day early, so check your listings if you want to tune in. It should be a good one too with the 2016 debut of Sergio Garcia and a host of top European Tour players.

← Who should replace Greg Norman at FOX?
Golf GIFs of the Week: January 25th →